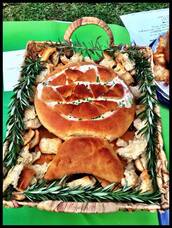 
The third annual "COB Loaf World Championships" will be held on Saturday 16 November 2019 at Cameron Park in Wellington, NSW. Not only will there be the judging of the "World Champion", there will also be an opportunity to experience some sensational COB Loaves.

There will also be the inaugural "Double Dip" Zoo2Zoo. A ride from Taronga Zoo to Wellington, via Geurie. The idea is to star at Taronga Western Plains Zoo at 10am, Saturday 16 October 2019 (meet at the "rock" - outside the zoo). Ride to Geurie Pool (50km) and have a "dip" - roughly noon. Then ride another 30km to Wellington Pool for a second "Dip". Make sure you bring a change of clothes, a towel and swimmers - there will be a support car to put your gear in.

A lift back at 8pm after the "Cob Loaf" Festival will be possible. No cost - pay your own way. There will be supplies in the support cars.

Timetable
A rundown on what to expect next Saturday: